On Wednesday 18 November 2020, the Internationalization Cell of SCMS, NOIDA organized a webinar on "Predictive analytics in the everyday business world: A machine learning perspective" at 10:00 AM for students of all the three batches 2018-21, 2019-22 and 2020-23. The webinar was a part of the “Global Talk Series on Management Practices in Industry 4.0”.

Mr. Eric Siegel, the founder of Predictive Analytics World and Coursera was the guest speaker for the event who is also an ex- professor at the University of Columbia, United States.

The speaker commenced his session by setting up an agenda for the session which was basically about Introduction to Predictive Analytics, how it delivers value while targeting the market and targeting retention followed by how it works (the prediction effect and data entry). To explain the concept of predictive analytics in a less complicated manner he took a live example of Barack Obama in 2012 US presidential elections. The speaker explained to students as to how Barack Obama used predictive analytics for forecasting his chances of winning the elections.  Then he explained the relation between predictive analytics and machine learning, and how they are different from each other. The speaker also gave a brief view of the relation between big data, data science with the help of Venn diagram. He further explained how data plays a vital role in predictive modeling and how it helps in forecasting followed by the concept of data entry where he explained the decision tree, customer attrition and antidote to information overload: prediction by giving the example of several organizations like “GOOGLE for search results, NETFLIX for movie/series recommendation, FACEBOOK for news feed, AMAZON for recommendations, etc.”.

The discussion was followed by a Question and Answer round where the students were given an opportunity to clarify their doubts and queries and to interact with the guest. There was an active participation of students in the event which was clearly visible in the round. Some of the questions asked by the students were about the scope of analytics with non-tech subjects, how predictive analytics will revolutionize the whole e-payments ecosystem and how will it change the existing cash flow. The session ended with a vote of thanks from The Internationalization Cell of SCMS, NOIDA.

Following are some of the pictures from the event. 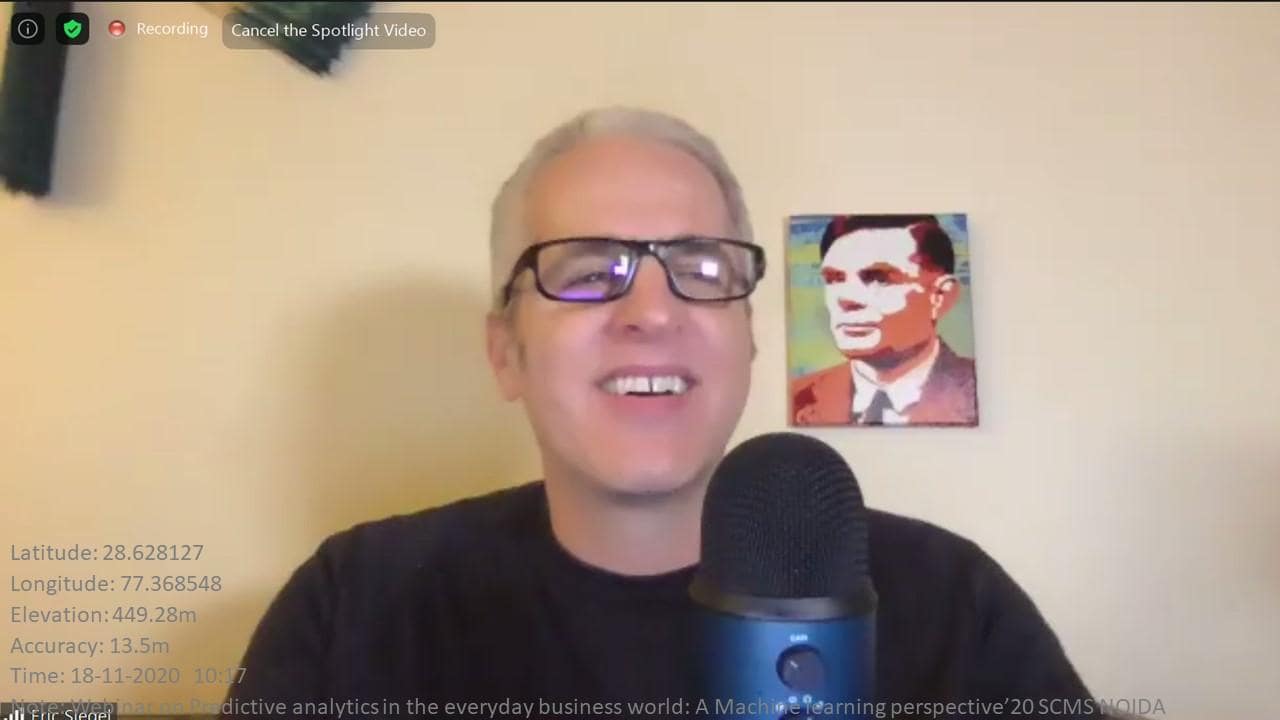 The Business Analytics Club of SCMS NOIDA organized a guest lecture on 28th November 2020 by Mr. Akash Kapoor which was attended by students across specialization from 2nd as well as 3rd year.

Mr. Akash Kapoor is currently working in Agreeya Solutions as Senior Manager and Practice Lead of BI and Analytics and is spreading the BI for a finance company for channels including marketing, legal collection etc. He has designed a real time dashboard with Azure IOT Hub. Mr. Kapoor is highly skilled in analysing data, applying statistical and data mining techniques. He is proficient in end- to end design of BI Solutions to meet global needs. He has a merit of delivering big data projects namely to the world's largest biometrics identification system (Aadhar). He has written numerous articles on BI and data science, thesis and has been a part of multifarious projects.

Mr. Kapoor began by familiarizing the audience about the topic.He introduced the students about Power BI, it being a cloud-based business analytics service from Microsoft which enables anyone to visualize and analyse the given data, with better speed and efficiency. He also discussed about Power BI being a powerful as well as a flexible tool for linking with and analysing a huge variety of data. Power BI is also compatible with multiple sources, including Excel, SQL Server, and cloud-based data repositories which makes it an excellent choice for Data Scientists. The audience was further told about the components of power BI namely Power BI Desktop, Power BI Service, Power BI Mobile Apps, Power BI Gateway, Power BI Embedded, Power BI Report Server, Power BI Visuals Marketplace. Students were also informed about some of the benefits of using Power BI

Moreover, throughout the session the emphasis was more on the practical application of Visualization through Power BI because the speaker wanted the students to see how easy and efficient it is to work on Power BI. Mr Kapoor was able to practically show this through Power BI desktop. Line by line instructions were given on how to work on Power BI Desktop and at the end he  also presented his Dashboard which he created himself during the webinar itself.

The session was ended by answering some of the questions that were asked by the students. The students enthusiastically cleared their doubts to which Mr. Kapoor answered unfailingly and enlightened the students with his vast knowledge.

This event wouldn’t have been a success without the constant presence and support of Dr. Nidhi Natrajan ,Area Chair-Business Analytics, and the students affairs team of SCMS NOIDA.

Photographs of the events are : 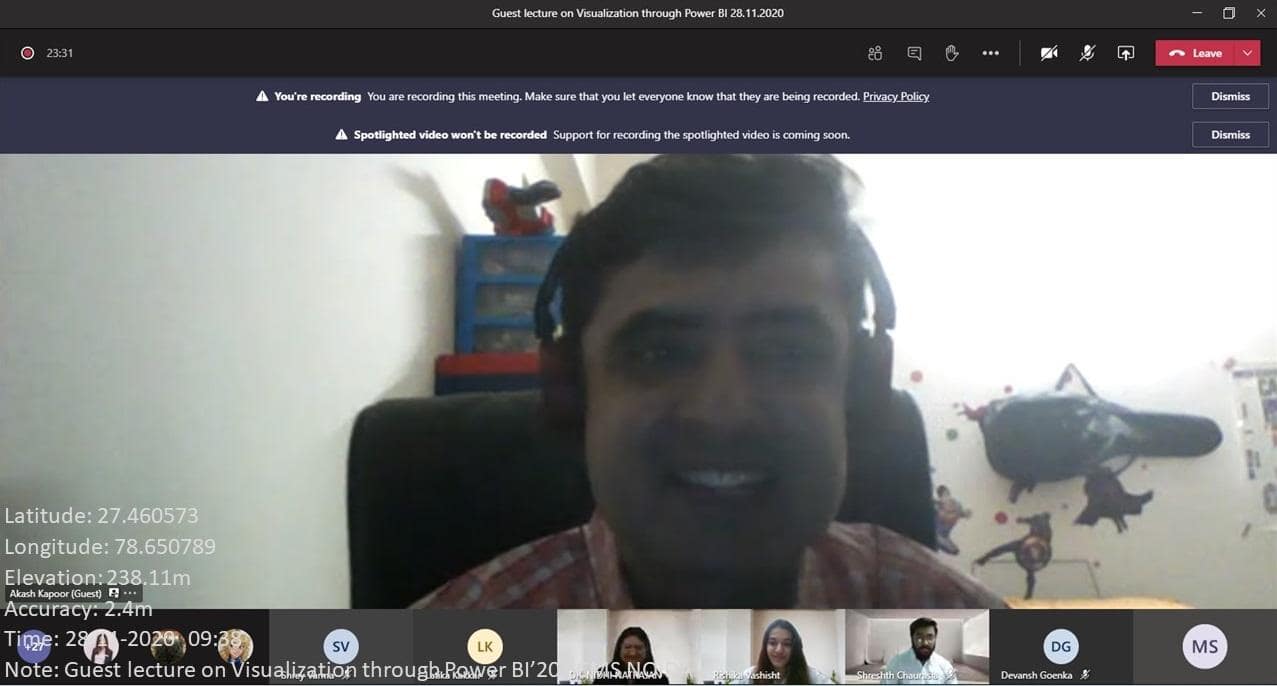 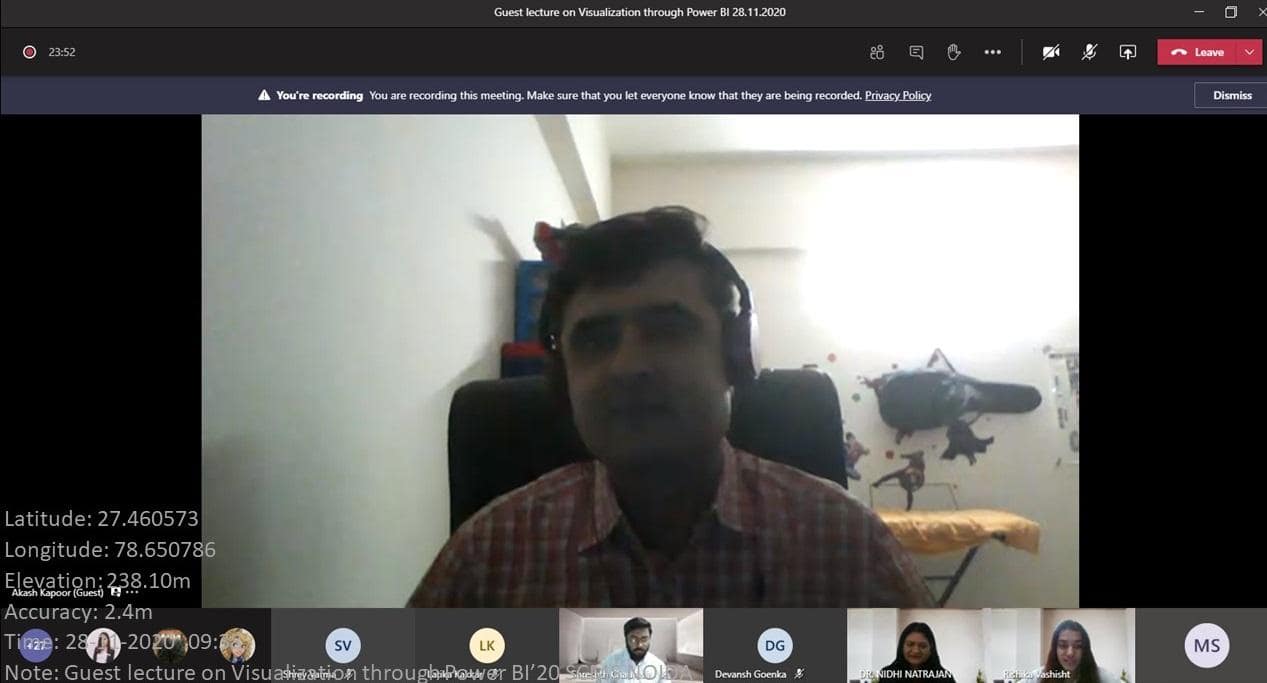 Trends and Opportunities in Business Analytics

The Analytics Cluster at SCMS NOIDA hosted a webinar on “Trends and Opportunities in Business Analytics” on June 10, 2020. Prof. (Dr.) Tarun Kumar Singhal & Dr. Nidhi Shridhar Natrajan conducted this webinar jointly for the students of BBA 2019-22 batch. The webinar was initiated with two presentations for 20 minutes followed by a question & answer round for 15 minutes. The students were briefed about the need and benefit of Analytics and Business Intelligence. Following top industry trends were highlighted:

The list of all the courses offered for the batch was shared with the students. The courses are chosen in such a way that all the aspect of analytics; data collection, mining and visualization are covered. Along with data analysis aspect programming fundamentals are covered as well. The later part of the presentation focused on the best possible career opportunities in Business Analytics for BBA students:

The webinar was informative and fruitful for the students for choosing courses as per their interests and future career aspirations.  The Webinar ended with a suggestion to the students for connecting through email in case of additional clarifications with respect to Business Analytics specialization.